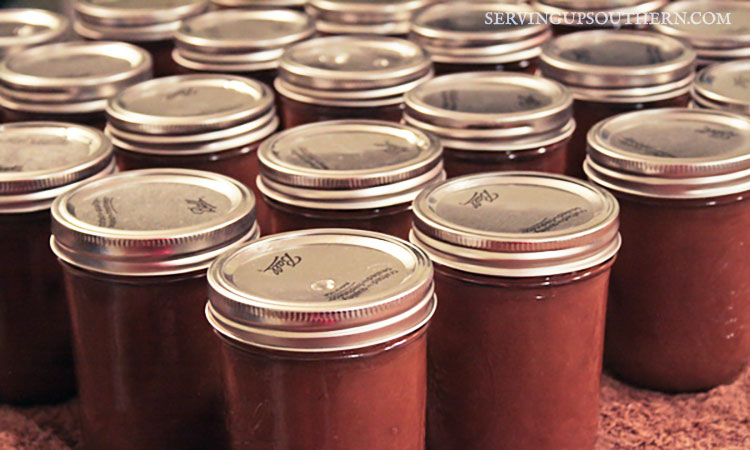 Apple butter is more than a sweet breakfast condiment—in my family, apple butter is a peace offering. My parents gift jars of homemade apple butter to new friends and family as a welcome present or to co-workers during the holidays. Any time I make a new friend or meet someone’s family, my mother sends me a jar (or two) to give to their family. Every jar handed out is prefaced with a story about how the apple butter is made every year by family near New Market, Tennessee. My grandmother’s cousins, Wilma and Norman, and Wilma’s late husband, Jack, are the crew that initiated this family tradition about fifteen years ago. The family sets a date every year to make the apple butter and invites friends, family, neighbors, church members to help make it—no one leaves a stranger.

Having only ever attended once when I was very young, I could not recall the hard work that went into making apple butter; I was not quite old enough to stir the kettle. I wanted to learn more about this family tradition so this week I called up Norman, the mastermind behind apple butter making, to pick his brain about how it is made and the history behind the sweetest, tastiest biscuit topping there is.

Norman has been making apple butter for twenty years and was first introduced to the process through his local Ruritan Club. The club would buy apples from local orchards. Members would peel, core, and cut the apples into small pieces and take them to a cannery to be steamed in kettles. Jack, Norman’s brother-in-law, became interested in the apple butter making process and asked Norman to make apple butter with him. Norman replied, “If you come up with a kettle, we’ll make it.” Sure enough, they found a forty-gallon copper kettle for sale in Florida and purchased it for the low, low price of $125.

It turns out, apple butter is a group effort. From start to finish it takes about six hours to make. The large copper kettle is placed on top of, but not touching, a stoked fire (typically made from a hard wood that burns hotter and longer) and filled with unsweetened applesauce so they can control the tartness. About sixty pounds of sugar are stirred into to the mix throughout the cooking process. The mixture must be stirred constantly and the wooden paddle must never leave the bottom of the kettle or else it will burn. “It’s nice to have lots of people there to help. We all take turns stirring for fifteen minutes each hour. Some people scare me in the way that they stir,” Norman joked. “My secret method is to use a figure eight pattern.” To give it some added flavor, Norman throws in one ounce of cinnamon oil before the kettle is ready to be taken off the fire so it doesn’t cook off.

Norman knows the kettle is ready to be taken off the heat by spooning out a small portion onto a plate. If there is a ring of water around the apple butter, it needs to be left on longer. Once enough water has evaporated, the apple butter is ready to be divvied up into jars—no one wants soupy apple butter. As soon as the paddle goes out of the kettle, two assembly lines are formed. Pitchers are used to neatly pour the apple butter into mason jars that are then sealed with two-piece lids. Each batch yields approximately two-hundred pints and those who helped make it get to take the fruits of their labor home to enjoy and share. Empty jars are returned to Wilma, who cleans them for the next year.

“In early years, families had orchards or an apple tree or two they used to make apple butter from but as time’s gone by apples have become harder to find and more expensive,” Norman explained. Additionally, Peeling, cutting, and coring takes up a lot of time. He went on to add that people traditionally used brass kettles, as folks back in the day believed copper kettles were toxic. “They mistook the metallic taste for poison. To get rid of the metallic taste, I neutralize the copper kettle with vinegar before cooking.”

The best part of making apple butter is not the finished product, but the people who help make it. “Being together and creating it together is something families often miss out on or never do. It’s easy to make, you just need a lot of people. I meet new people every year. Wilma’s eye doctor showed up last year,” Norman said. After my conversation with Norman, I have a different appreciation for gifting my family’s homemade apple butter to people. It is truly a labor of love and creates the perfect atmosphere for fellowship and friendship.

Author’s Notes: There are many ways to enjoy apple butter – my favorite being on top of plain toast or buttermilk biscuits. If you want to incorporate the apple butter into a meal, you may enjoy the following recipe sent to me by my mother.

Directions: Brush cut sides of the ciabatta rolls with oil. Place the halves cut side up on a baking sheet. Broil until rolls begin to brown around edges (about 2 minutes). Spread apple butter and mustard on each roll half. Top with ham and cheese. Broil until cheese melts and begins to brown in spots (about 2 minutes). Sprinkle with chives and serve.