[email protected]
Appalachian Foodways: Taking Soup Beans from the Mountains to the Factories by Mike Templeton 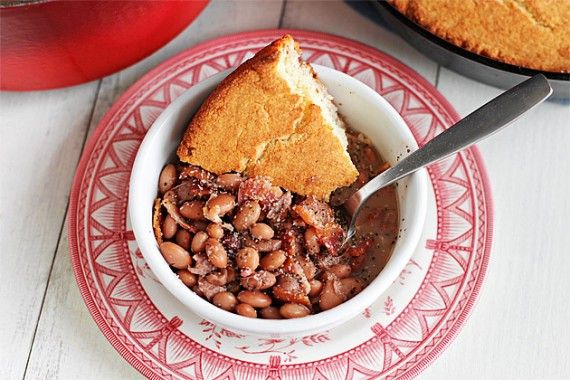 Food is central to understanding culture in the broadest sense. You can get pretty brainy on this topic and start pulling cultural anthropologists from the library shelves, but for our purposes, looking at a few stand-out features of Appalachian foodways will have to suffice. After talking to Jeff Dey of UACC about some ideas, soup beans stood out as a fine way to begin. I have fond memories of my own mother simmering a big pot of soup beans all day long. The fact that my mother was not Appalachian, but a dyed-in-the-wool Cincinnati German testifies the influence of Appalachian culture and foodways in Greater Cincinnati. Served with corn bread and fresh summer tomatoes, I saw a dinner of soup beans like it was haute cuisine (I still do).

Many of the staples that came to be identified with Appalachian cuisine have as much to do with their durability as how they taste. The climate and terrain of most of the Appalachian region made it difficult to sustain crops year-round, and the people who settled this region learned early on how to cultivate things that could be dried or preserved for use throughout the year. The simple pinto bean made for a likely food staple. Flavored with ham, which could also be smoked and preserved, a delicious feature of Appalachian cuisine came into being.

Mark Sohn, in his book, Appalachian Home Cooking, explains that soup beans could be packed into tins and taken to the fields and the coal mines. They made easy lunches for school children in Appalachia. Combined with cornbread—a topic I will address in another post—a simple meal of soup beans made for a filling and high-protein meal, whether at the heart of a delicious dinner or as a simple meal on the go. The central place of simple pintos and cornbread became a staple of Appalachian foodways, and the ways of life that grew around these kinds of foods became indelibly linked to Appalachian culture. Poet and UACC Core Member Pauletta Hansel was a young writer during the Appalachian Literary Renaissance of the 1970s. She coined the name of the influential Soupbean Poets of Antioch Appalachia—“It was,” she said, “the only thing we all agreed on as being Appalachian enough!”

We should be clear about the fact that soup beans are to be distinguished from bean soup. These are two different things. Soup beans are simmered for hours and are served as an entrée with corn bread, greens, and often fried potatoes, and they are thick with beans and ham stock derived from hocks or other bones. Soup beans are not soup. As to how to properly cook soup beans, I know I am treading into dangerous territory because soup beans are as varied as the populations that make up Appalachia. Should you put them in a crock-pot? Some would call this heresy. Can one use canned beans? Again, an answer here is likely to start a fight. If we stick with Mark Sohn’s book, dried pinto beans are the way to go. The beans need to be soaked overnight and simmered the following day for as long as eight hours. This is how I remember my mother making soup beans, and I know of no short-cuts that produce the same culinary experience.

As Appalachians migrated from the hills and mountains to the cities in search of work and other opportunities, they brought the culture of Appalachia with them and this included Appalachian foodways. Joe Tucker, of Tucker’s Restaurant on Vine Street told me that his parents opened Tucker’s restaurant on East 13th street shortly after World War II. Joe said his mother, Maynie Tucker, who came to Cincinnati from Russell Springs, Kentucky, made soup beans seven days a week. A bowl of soup beans cost 25 cents. The newly arrived Appalachian migrants living in one-room tenement apartments in Over-the-Rhine took Maynie Tucker’s soup beans with them to the factories. The foodways of Appalachia remained a staple for urban Appalachians, sustaining both the life of migrant workers and the Appalachian culture that persists to this day.

Perhaps as it is for all those who migrate to new parts of the world, Appalachian foodways grounded people in ways some could scarcely identify. Courtney Balestier writes about coming to find her West Virginia identity precisely because she had been displaced. As a West Virginian in New York City, she came to see her sense of herself in ways that were tied to her home, and she located this in the foods she identifies with home. Balestier explains that “we cook what’s familiar, preserving the recipe, the story, the self. We do this because, when we’re uprooted, food is our root. It’s also our root long before we’re uprooted, long before we realize it.” Appalachians in the Cincinnati area cooked soup beans because they were simple sustenance. The more Appalachians became urban Appalachians, the more soup beans became a defining feature of a culture. Perhaps precisely because urban Appalachians had become displaced from their homes, soup beans became a way of preserving their root, as Balestier explains. Certainly, preserving our root is at the heart of the work of the Urban Appalachian Community Coalition.

One thought on “Appalachian Foodways: Taking Soup Beans from the Mountains to the Factories by Mike Templeton”