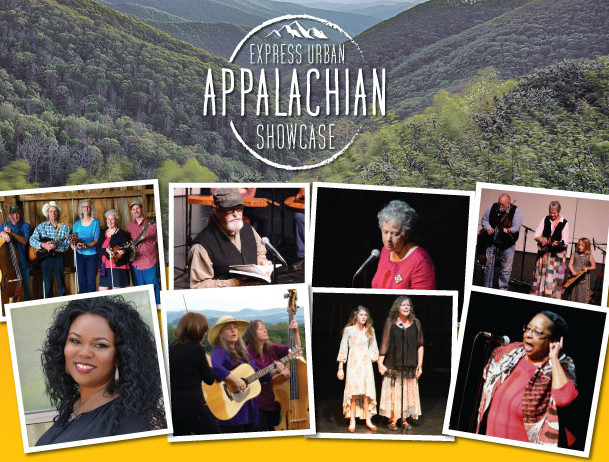 Of the many reasons Appalachian culture is so inexhaustible is that it is made up of so many elements. There is no single thread that defines Appalachian people, culture, and art. The British Isles, Native Americans, north and south—Appalachia has been shaped and defined in multiple ways since as far back as you want to go. And Appalachia is still continuously growing and becoming new.

With the Express Urban Appalachian Showcase coming up, and I thought it would be helpful to get a sense of what the artists will bringing to the program. If you have been lucky enough to take in a performance of Soul Pocket you have heard the amazing voice of Dee Marie. Dee will be bringing that voice and some of her Appalachian identity to the performance.

Dee tells me her family settled in Central Appalachia in Pineville, Kentucky in the early 1900s. Her father was born in 1924 and followed his older brothers into the coal mine. Dee identifies her Appalachian heritage as Affrilachian after a term coined by Frank X. Walker. As African Americans settled in the Appalachians, they took their place amid the multilayered culture of the mountains and added some of the African traditions they brought with them. The mountains and culture became further enriched with these elements and from this Dee found some of her earliest musical influences.

Dee began as a vocalist and performer with her own family. Music has always been part of the fluid of life for her. As she explains it to me, “My Father and my 2 older brothers, were expert musicians who played Banjo, Harmonica, Guitar, Bass, and Piano. From about the age of 3, I would sing with them at home and at church.” The styles were exactly what we would expect from a family in the Appalachian hills, but it included many other textures, “My musical style has always been a blend of Country Music, Blues, Jazz, and Gospel. After all, Bluegrass music’s parent genres are Country Music and Jazz.” She brings all of this together for her work with Soul Pocket.

Dee Marie will sing some a cappella pieces and will also perform some spoken word for the Express Urban Appalachian Showcase. When I pressed her for details, she said she “can’t give too much away.” I have to concede that the element of surprise will only heighten the excitement for this event. As I said, if you have heard Soul Pocket, you know you are in for some thrills.

Clearly, the Express Urban Appalachian Showcase will provide serious entertainment, but it is just as clear that people will take some thoughts and ideas from the event. It seems inevitable that such a gathering of poets, performers, and artists will leave lasting impressions. I asked Dee Marie what she hoped people will take away from the evening. She told me that by sharing a little piece of her family’s experience and contribution she hopes people will come away with the awareness that “the traditions of Appalachia were created by a diverse group of individuals and families. The Appalachian experience offers meaning for everyone because Art, in all forms, is a universal language.” I can think of no better aspiration for the Express Urban Appalachian Showcase. As we revel in the culture, art, and music of Appalachia, we should be able to see this experience as distinctly human, one that reaches everyone in one form or another.

Express Urban Appalachian Showcase is this coming Thursday, October 24 at 7:00 pm. In a variety show style, our community’s most dynamic Appalachian musicians, singers, storytellers, poets, spoken word artists, and dancers will express the diversity of our city’s Appalachian cultural heritage.

Tickets may be purchased online at the Aronoff event page: https://www.cincinnatiarts.org/events/detail/euas, or at the Aronoff Center Ticket Office · (513) 621-ARTS (2787).