[email protected]
Something’s Wrong Here, We Need to Right It 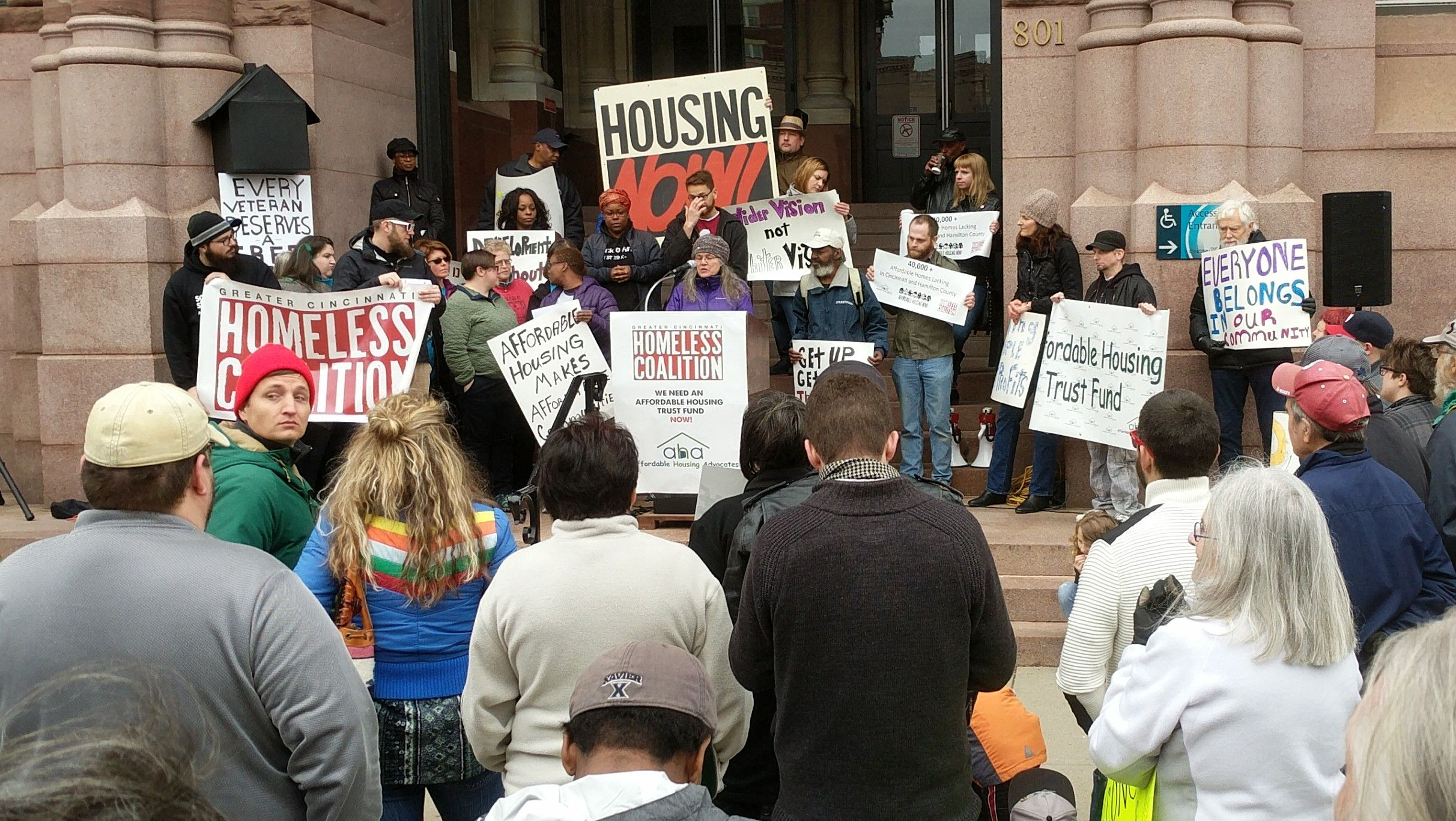 Bonnie Neumeier is a long-time advocate for Black and Appalachian urban core neighborhoods in Cincinnati.  She has witnessed the decline of these residential neighborhoods over the course of her career. These remarks were spoken at the National Day of Action for Housing in Cincinnati, City Hall on April 1, 2017. The action was intended partly in response to a study by the Local Initiatives Support Corporation that reports a deficit of 40,000 units of low-income housing in Hamilton County. The key theme of the rally was a proposal for an Affordable Housing Trust Fund.

Get up, get down,
There’s a housing crisis in our town

I have a grave concern about how housing development is done in our City.  Without policies that are both equitable and ethical, without concrete plans and incentives for racially and economically diverse and inclusive neighborhoods, we in essence are creating a concentration of the privileged and displacing persons with low incomes from our urban core neighborhoods.

I have witnessed the decline of affordable housing both in the central business district and Over-the-Rhine and the West End and many other neighborhoods in this city.   All of us benefit if we live in neighborhoods that value the strengths and assets that our people possess, even if we have only pennies in our pockets.

In 1973 we opened a storefront on Vine Street to house persons experiencing homelessness, 25 – 30 mats for men.  That number has grown huge over these 44 years, families with children are the face of those homeless today.

I’ve seen the loss of single room occupancy units of housing disappear (the Milner, the Metropole, the Dennison).  Gone.  People can’t rent by the week in this city, that option no longer exists. When working day labor jobs or low wage jobs sometimes a worker can only afford a week’s rent.  We also now have landlords opting out of subsidy when they catch the gentrification fever.

Our City needs to support equitable development, development without displacement. There are tools and resources that can help make things right. We need to push and support a Local Housing Trust Fund, create inclusionary zoning, and have an effective anti-displacement ordinance.  Developers must be willing to enter in to Community Benefit Agreements.  We have to get much more creative and use alternative models like Community Land Trusts.

When plans are made in our communities without the peoples input and voice in decision making, our needs and wants get overlooked.  As renters, we call our neighborhoods our home.  It’s not fair, it’s not just, that when the waves of gentrification overpower our neighborhoods, it’s the poor, the working poor whose lives get yanked around like their checker pieces.

I long to see the day when I get a colorful postcard in my mail box that announces there are affordable housing units a plenty in our neighborhoods.

It’s folks like her I want to live around
She’s open and honest
The stories people carry in their bones
They have lived simple lives on simple budgets
Down to earth, ordinary, common
Her giddy laugh lifted my spirits that morning
We need to do more for the commoners

Our people get that feeling they are not wanted when we see development that does not consider our needs and wants and prices us out of our neighborhoods we call HOME.