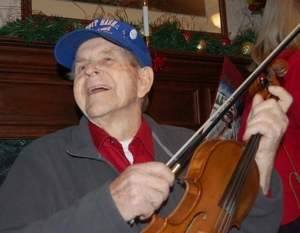 Tom Taylor, an exceptional northern Kentucky fiddler, was born March 17, 1924, in Adair County on the border between Kentucky and Tennessee. He was proud to say “Both states claim me.  Kentucky claims I’m from Tennessee, and Tennessee claims I’m from Kentucky.” He founded our band, The Rabbit Hash String Band. He pulled the five of us together — Warren and Judy Waldron, Russ and Barb Childers, and Tommy — based on our common love of the music of the 1920s north Georgia band, The Skillet Lickers. When failing health overtook him, he retired from playing music but still liked to “fiddle around” and share his rapid-fire delivery of an incredible wealth of awful corny jokes when we came to call on him at home in Rabbit Hash and later at the nursing facility where he spent his end days. I wrote this in honor of Tommy Taylor on his 80th birthday, St. Patrick’s Day 2004 but never shared it with him.  Sadly our dear friend and mentor Thomas Taylor passed away on December 13, 2015. He was 91 years old.
Kentucky Wonder
Skinny as a string bean
wandering plowed fields
of his childhood,
Tom sends out runners.
Poor feller was cross-eyed,
you know, lookin’ like he was
born in the middle of next week,
lookin’ both ways for Sunday.
But I knew how to get
that poor feller’s goat, you know,
cause I knew just where he kept it tied.
Give ‘im two mules, and durned if that
poor feller could tell ’em apart, they’s
so much alike — both of ’em eat
the same way, drink the same way.
Til one day he discovered that
the brown one stepped a little higher,
you know, than the white one.
Laughter makes him bloom.
He straightens, somehow
taller, turning to light.
Impatient as a bean sprout
bursting from the soil,
he seeks the listener’s
beam of approval.
Written by Barb Childers, February 2004