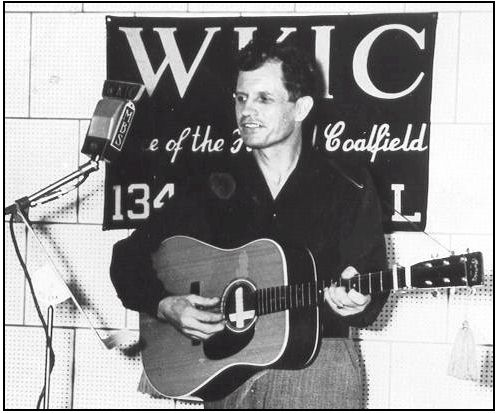 In this UACC blog entry, Troy Davis tells the story of researching family history in Appalachia.  His distant uncle, singer and radio personality George Davis, had been interviewed in the 1930s by the great folklorist Alan Lomax, who collected extensively in Appalachia.  The recording of that interview was still housed in the Library of Congress, and was available to be digitized at the request of any living family member.  Troy explains how anyone who might have been visited by Lomax can search the Library catalog for family members who might have been recorded.  Cover photo of George Davis is courtesy of WSGS 101.1 FM in Hazard, KY.

About 10 years ago I heard from a relative that my grandfather’s uncle had been a successful musician and radio personality in Hazard, Kentucky during the 1930s and through the 1970s or so. Being an amateur musician myself, I was immediately curious.

George Davis had been a miner since he was old enough to swing a pick, from what I could gather. Conditions were deplorable in the mines of course, and as a result George became a supporter of unionization in a time when it was quite dangerous to do so. Many of the songs he wrote concern how he and his friends struggled to unionize with the hopes of raising safety standards and wages, free themselves from the tyranny of company stores, and the intimidation and retaliation tactics the mine owners engaged in to shut down their unionization efforts.

It’s unclear when George started playing guitar, but that seems to have been an early interest of his. In any case, he continued spending his days mining bituminous coal until an accident left him with a badly injured arm that prevented him from being a miner ever again. Luckily it did not stop him from playing guitar.

George ramped up his union activism and started traveling from one mining town to another, playing anywhere he could, becoming known as the Singing Miner. I’m unclear on the timeline here, but at some point the mines unionized, and George landed a job as a radio host, playing popular music of the time as well as strumming out his own songs live over the air when the mood struck him. He kept his job at the radio station into old age, retiring in the late 70s or early 80s, and passed away in 2002.

I hadn’t heard of my great uncle George Davis before this, but a few internet searches revealed that WSGS, the radio station he worked at for many years in Hazard is still running, and even today their website prominently displays an image from 1969 of George running the board (http://www.wsgs.com/). Links to some music on their site seem to be broken, as they were then, so I contacted the station to see if they had anything else of note. Apparently his guitar is in a glass case in their lobby, and I hope to stop by there some time to see it, but they had very few recordings of him still, and most of what they had was on the website already.

Not willing to be discouraged yet, I continued searching and found a few CDs that were available, each of which included a track from George’s work, and I ordered those right away. These were recordings from the 60s, George had to be in his late 40s or 50s at the time. But then I noticed some search results in the Library of Congress’ American Folklife Center as well. This got very interesting, here were early recordings of my great uncle, from the 1930s!

I then learned about Alan Lomax, who travelled around all over America during the New Deal, making audio recordings for the American Folklife Center, paid for by Congress no less. The funding dried up in 1942, but Alan kept traveling, this time all over the world. Alan’s wife Elizabeth was also credited in the recordings of my great uncle George in 1937 as they passed through Hazard, Kentucky, and then again in 1940. The two of them must have heard a tremendous variety of music in those days!

The Lomaxes apparently made a huge number of recordings, you can seem more information about them here: http://www.loc.gov/folklife/lomax/

Searching in the Library of Congress’ website for George Davis’ work, I eventually got this listing of results:

Not many tracks, but what a goldmine for my family now! I immediately got in touch with the archivists to see if these recordings (which were on deteriorating lacquer disks) could be transferred and digitized, which I thought would make a great Christmas gift for my grandfather. Unfortunately the cost to do so was prohibitively high for me at the time, and I didn’t ask questions since I just didn’t have the money for it.

Fast forward 5 years, and I had saved up some money for this purpose at last. I called the archivist again, who actually remembered the recordings I was requesting, and was hoping they’d be recovered at some point. And just as I was getting out my credit card, the archivist asked a wonderful question: “Are you related to the artist in any way?” I hadn’t even thought about that 5 years before. “Yes, he’s my great uncle.” I said. “Well, great news then,” the archivist replied, “we can recover these recordings at no charge for you.”

I was floored. I had waited 5 years, saved up hundreds of dollars, and I could have saved that time just by telling the archivist that I was related to George! To say I was happy just doesn’t capture it. And when I happily gave the CD to my grandfather that Christmas, he lit up brighter than the tree. He called his sister, and the two got together a few weeks later to listen to it together and reminisce about their uncle.

Now here’s where you come in…  You may very well have a relative who was recorded, and those recordings may be sitting in Washington D.C., just waiting for you to rescue them from certain destruction. I say certain because the wax cylinders, lacquered disks and other materials people of this era used are all falling apart as you read this. Some of the materials will survive for the time being, maybe a few more decades in the best scenarios. But many of the recordings have degraded to the point of being irretrievable. It’s just a matter of time for the rest.

Out of the 8,431 recordings attributed to Alan Lomax, only 498 are available online (See http://www.loc.gov/audio/?fa=contributor%3Alomax%2C+alan). Some have likely been transferred but just not published, but that still leaves a tremendous amount of cultural heritage that is just disintegrating one day at a time.

So here’s your challenge: Can you find a relative in the Library of Congress whose works haven’t been recovered from old media yet? If so, please contact the archivists today and save your family’s heritage. All of our heritage. For our grandchildren’s sake, and maybe even for their grandchildren’s sake as well. If you’re related, it will only cost you a little time searching the website. That’s a small price to rescue so much culture.

You can search the Library of Congress at http://www.loc.gov/.