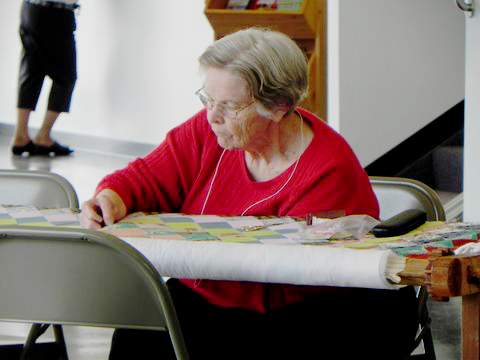 Nina Maxine Green Groves died May 21, 2015, at the University of Kentucky Medical Center of congestive heart failure and other complications. Maxine was not just the best known traditional quilter in this part of the world, she was an inspiration in the movement to promote traditional Appalachian arts in the world far beyond her Adams County home. Her daughter, Donna Sue Groves, organized the Quilt Barn Project. This project has now spread from Adams County to 43 other states and Canada and has 7000 known participants. Donna Sue has also provided technical assistance and encouragement to artists and arts organizations throughout Appalachian Ohio and Southwestern Ohio in work sponsored by the Ohio Arts Council. Maxine has left us and we take time to honor her work which will live on as long as we who loved her live. I am posting here some photos of Maxine, a partial list of her accomplishments and an article I wrote about her in the Appalachian Connection several years ago.

A celebration of life service will be held on a Saturday in August at the Green Family Cemetery in Roane County, West Virginia. If you would like to be part of this service, let me or Donna Sue know. Memorials may be sent to:

Funds will help with a plaque for Maxine, family expenses and the work of UACC.  Condolences can be sent to:

If you have other memories of Maxine, please post them below.

Maxine Groves is my favorite quilter. She lives in a beautiful rustic home in the forests of eastern Adams County. Her home is surrounded by wildflowers which she carefully nurtures. Her daughter, Donna Sue Groves, lives in a contemporary home nearby. It is as if the art the mother produces has nurtured the whole region. Donna Sue, the southern field rep for the Ohio Arts Council organized the Quilt Barn Project which hires local artists to paint traditional quilt patterns on barns. The project has spread from county to county in Appalachian Ohio and has now reached other states. This is just one of many projects that have emanated from the Groves’ retreat on Germany Hill. She has also lectured and demonstrated at libraries, museums, and festivals. She is a southern Ohio treasure. Maxine’s quilts have been exhibited throughout the southern Ohio and have won many awards.

Nina Maxine Green Groves is descended from five generations (both parents) of Appalachian families in the hills of West Virginia. She learned to knit, crochet, and quilt from her mother and grandmother as a small child. After rearing her children and teaching for twenty five years, she retired to Adams County, Ohio. Quilting has become more than a hobby, consuming much of her time.

Old quilts are her favorite, particularly old patterns with a new twist. The history of women as seen through their quilts is one facet of her on-going research. She often exhibits and lectures on traditional piecework quilts and the women who made them.

Her quilts have been featured in Over the Back Fence magazine and numerous newspapers throughout the region. She has exhibited her work at the Dairy Barn in Athens. Southern State Community College, Clermont College, Chatfield College, Shawnee State University, the Ohio Arts Council, King Arts Complex and the Ohio Designer Craftsmen Museum in Columbus, Ohio.

Teaching and quilting demonstrations are among her community activities. She has donated over a dozen quilts for community and organizational fund raisers.

Maxine’s dedication to quilting was the inspiration behind the Ohio Quilt Barn Trail and the American Quilt Trail. She was an active member on the original planning project committee. She provided the research for the quilt designs and worked with the artists to ensure accuracy.

In 1999, she received an Ohio Arts Council, Traditional Master Apprentice award. Maxine works out of her home studio.

One thought on “Tribute to Maxine Groves, Master Quilter”