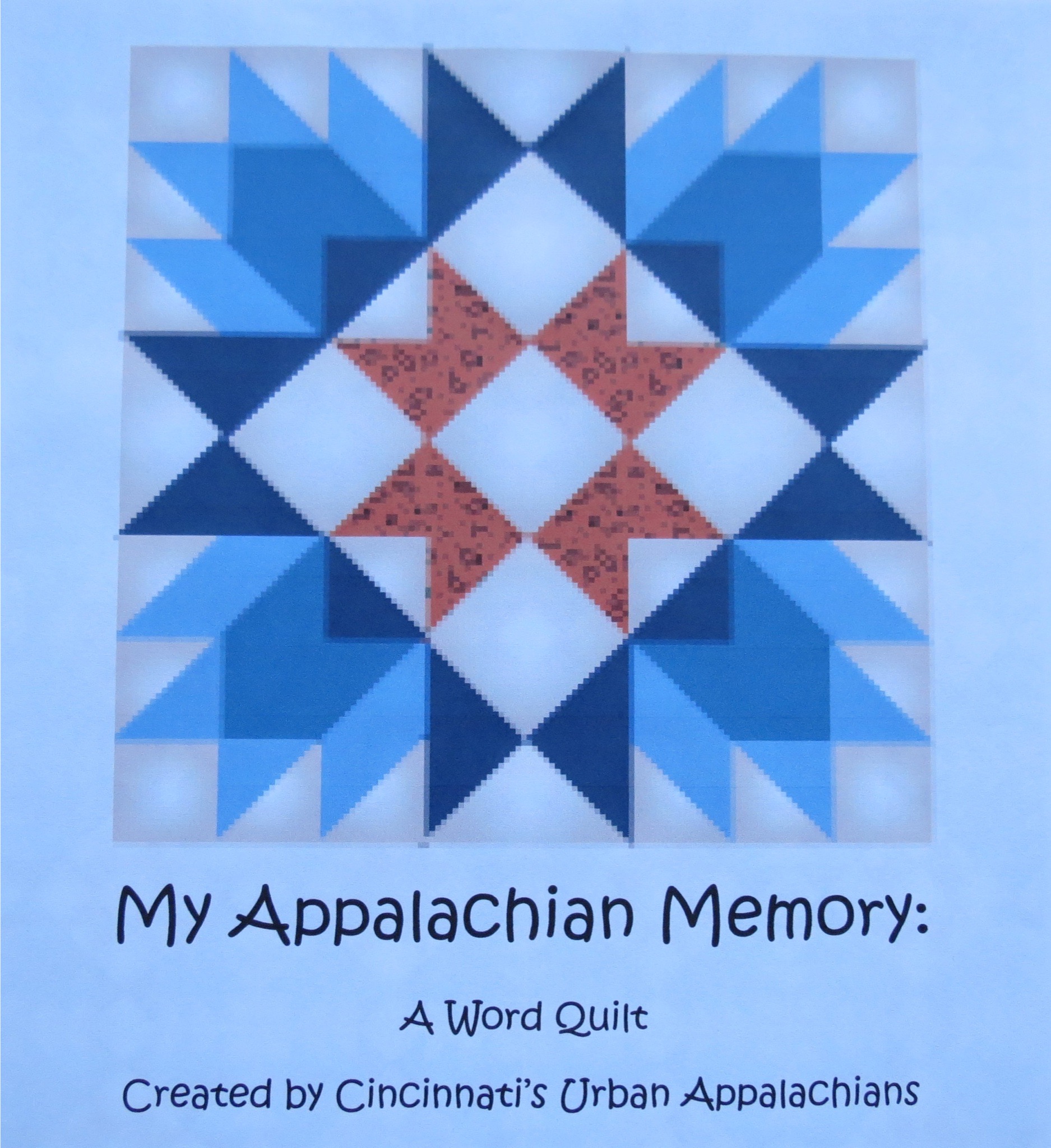 Quilts are certainly part of the Appalachian tradition.  There’s no denying that many quilters in our community carry on the old traditions of making something new from something old.  But most of us panic at the thought of making a quilt ourselves. Take heart! There is another way. If you have ever filled in a story or memory on the small half-sheets of paper left on the tables at the annual Ringin’ In, you are sharing stitches in My Appalachian Memory: A Word Quilt Created by Cincinnati’s Urban Appalachians. The scraps of stories collected from these gathered remnants create a larger story of who we are — a kind of “quilt” made of the words of urban Appalachian memories pieced together.

The very first “Word Quilt” of memories was pieced by Appalachians (and “partial Appalachians”) who came together in January 2004 at the annual Ringin’ in the Appalachian New Year celebration at Holy Family Church.  The church in Price Hill, seated in an urban Appalachian neighborhood of Cincinnati, Ohio, provided a perfect setting to launch the project. In the midst of noisy Ringin’ In traditions of old-time music and dancing, of potluck shared over tall tales, we asked guests to contribute a scrap of family story, an anecdote, or even a single word – urging them to write something that would recall Appalachia in the mind of its readers.  Those first nineteen participants honored our request.  They mined deep into their mental scrapbags, withdrawing colorful mountain treasures.

As creator and caretaker of My Appalachian Memory, I have pieced and patched the resulting eleven years worth of word images together, hoping to retain all the original charm shining bright and delectable as the mountain life remembered in them. Quilt block pattern “Delectable Mountains” was chosen for the cover of the project because it combines Ohio Star with the distant mountains of home. Indeed, the traditional design is a fitting tribute to urban Appalachians who migrated to Ohio from those mountains.

And how the stories roll in! The collection expanded from one looseleaf notebook to two for the 2012 Ringin’ In. The venue changed from the Price Hill neighborhood to North Presbyterian Church in Northside and back to Price Hill. By the time the 2016 celebration rolls around, a third volume will be needed to hold the stories of the migrant Appalachian community in Cincinnati.  There are so many wonderful entries collected from all ages for the Word Quilt that we hope to share some of them in this blog; some are drawings. Here is one from an anonymous contributor that will surely whet your appetite for more! Example of a “word quilt” memory from home is this anonymous offering, a drawing with the caption “coon hunting is one of my good down home memories.”

My Appalachian Memory — a quiet little project with a lot of support. The remembrance quilt of words began as the germ of an idea of Melissa English when she chaired the UAC Cultural Programs. She inspired me to create it. It continued under the auspices of the Urban Appalachian Community Coalition when UAC closed in 2014.  Over the years UAC (now UACC) and the cultural events it sponsored received support from such agencies as the City of Cincinnati, the Ohio Arts Council, the National Endowment for the Arts, the Commission on Religion in Appalachia, the Fine Arts Fund, the Appalachian Fund, and the Appalachian Community Development Association.

But mostly, our “Word Quilt” project succeeds because of the support of people like you! Write us a memory at next year’s Ringin’ In (January 17)! We’ll stitch your words together to create a warm virtual “comforter” for future generations, so that they’ll understand what it means to be an Appalachian at heart, no matter where you live.